Over the winter we had spent our time putting in a loop line and building a second platform.  The idea being that when we were busy we would have dedicated arrival and departure platforms to ease the passenger flows.

(The lamps on Shirley are from the Engineers Emporium, fully working oil lamps)

These pictures can be found in the 2006 Gallery, including Stumpy being jump started from the Land Rover!

The points are sprung so there is no "staff" involvement.  The arriving train "sets down" in platform 1 (nearest the booking office) and when empty reverses over the crossover onto the loop line.  The driver then runs forward into platform 2 and collects the next load of passengers. When the train is in the loop, the other train is free to run into platform 1.  It's not quite as simple as that as there are some restrictions to reduce the risk of a side swipe, but that's all covered in our operating rules.

Spring Lambing had it's moments.  If there is one thing I am rapidly learning it is the sheer amount of maintenance that is required on the railway, both on the rolling stock and on the infrastructure.  We also had a new (to me) passenger truck running for the first time and that gave a few problems. In particular if refused to reverse over the crossover without derailing.  We checked everything and before Easter I even changed the springs and added two breeze blocks - still no effect.  Eventually putting by putting it in a different place in the rake the problem was solved!

On Easter Monday we had Stumpy in service for the start of day. Just as Shirley (1/3 scale Bagnall) got up to pressure Stumpy started losing power, so Stumpy was taken out of service and as it was still quiet I started stripping the carburettor down.  Shirley took over the duty. 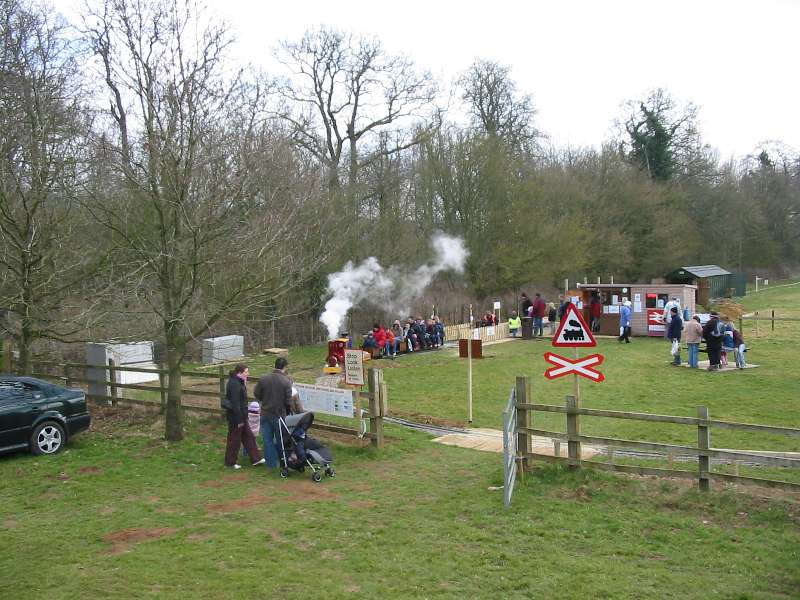 The carburettor was stripped, nothing was found, but there  could easily have been a bit of grit in there.  Lady Mari Jacqueline (Lady MJ) was now up to pressure and started work on the second train.  I was driving her, she went round empty first, no problems, picked up her passengers and went off around the track.   ON approach to High Hole (our tunnel) she made a funny noise, lost power and there was this banging noise.  She had lost a crank pin (fortunately at the rear) and the connecting rod was bumping on the sleepers.  Declared a failure I was glad that I had sorted Stumpy out who was quickly pressed into service and did sterling service through the day.

On our most recent running day (apart from loose sheep causing a few problems, although never getting near the line) the train ran around empty, but every time after that derailed at Wallaby Curve.  Grahame was soon hard at work with a level and packing but regardless what we did and what speed we travelled, we derailed.  A closer inspection showed that we had rail damage, probably caused by a heavy vehicle over the rail.  We had no option.  Suspend service and replace the affected length of rail.  I was quite impressed, only 30 minutes to fit in a new 6' length.  However as part of this "learning" exercise, I now have a "broken rail kit" comprising 4 fishplates, all the nuts and bolts and a hacksaw on standby.  You live and learn!

The rest of the day was uneventful, Shirley performed well and we carried just under 200 passengers.  What was nice was that the people we had to turn away during our 30 minute suspension of service, all came back later.

The only change we made recently was the addition of a full size 3 aspect colour light signal.  I should add my grateful  thanks to Westinghouse Rail Systems Limited who kindly supplied me with spare lamps and ECRs (lamp checking relays to the non signal engineers) to get it fully operational.  This is sited just on the Wallaby Curve side of High Hole and controls the approach to the station:

Back to Front Page